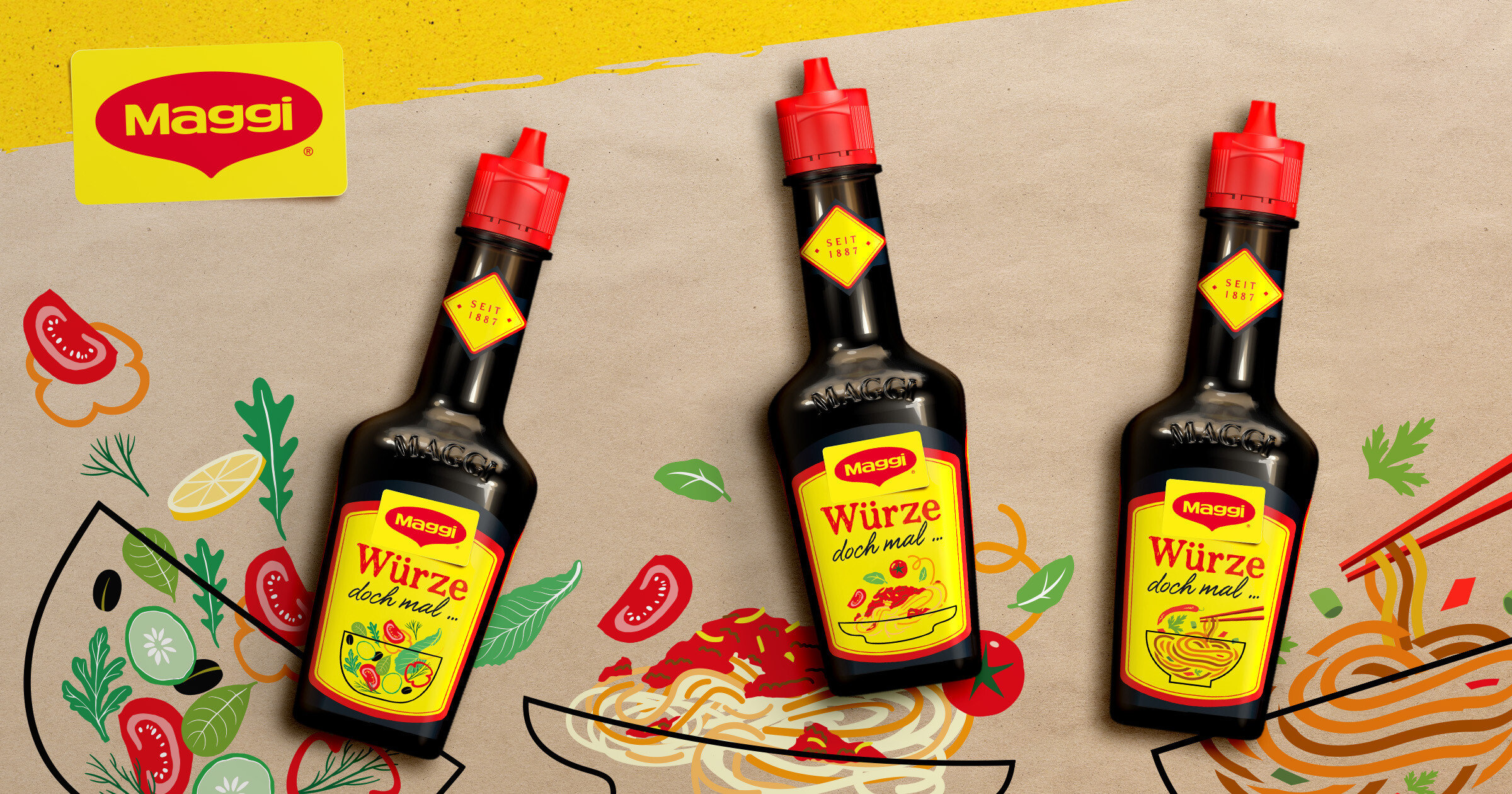 … different dishes with the classic! This is the motto of the new packaging design of the universally known vegan seasoning sauce during the promo campaign in 2020. The ingredients are still the same, which have proven themselves for decades – yes, especially in soups and stews. But Maggi seasoning can do much more. And that’s exactly what it showed.

Everyone knows it, most love it: The Maggi seasoning is THE icon. For the 2020 promotion, it was given a new, refreshed image, one that gets to the heart of its versatility. It should no longer be labeled as a mere soup seasoning, but finally be seen as an ingredient that can add “that certain drop of something” to numerous dishes. The goal was to communicate this added value on the packaging design during the promo campaign in order to encourage people to use the product in a more diverse way and, as a result, to increase sales of Maggi seasoning.

Berndt+Partner Creality took up the challenge. The task was to develop a design that would clearly express, through some kind of addition, disruptor, or hangtag, that the seasoning can also add some pep to dishes other than soups and stews. At the same time, it was of course important to Maggi not to change the current design too much – if only to make it clear to consumers that they can still expect the usual high Maggi quality in the seasoning sauce.

Another major challenge for our designers was to present the wide range of possible applications without giving the impression that there were several different types of seasoning sauce. So we had to redesign the packaging, but in such a way that it retained 100 percent of the character of the Maggi icon and it was clear to everyone at first glance what the packaging was trying to say.

We decided on two specific measures: Three different print images illustrating different dishes inspire the viewer to enhance the respective advertised dish with the Maggi seasoning sauce. Exactly one of these three tasty inspirations is depicted on each seasoning.

The illustrative visualization, which inspires with its cool style and clearly recognizable details, is complemented by a preceding call to action: “Season with…” contains the product name “seasoning” from Maggi and, with the creatively inserted precise addition “but with…”, invites the viewer to garnish the depicted delicacy with Maggi seasoning, thus helping both the dish and the seasoning to achieve the well-deserved added value.